Texas high school girls’ basketball officially starts season practices this week. I remember the smell of the season well…the anticipation, the adrenaline, the competition. Accompanying all of those memories is the man who proved to be the most challenging coach I ever had.

I remember growing up and hearing other kids my age repeat what they heard their parents say about winning. “It’s not about winning, it’s about having fun.”

My father’s perspective differed slightly. “To me, winning is fun!”

That’s how he coached. He coached to win, he encouraged competition and he expected perfection in taught skills in order to complete that desired goal. That often translated into him being difficult, particularly more so on my sister and me. I hardly ever heard the accusation that the only reason I made the team or got playing time was due to him being the coach. Those who knew me, who knew Daddy well, were the ones who played alongside me from the days we didn’t know how to tie our shoelaces, let alone keep a pivot foot steady. These were the girls who knew from the start how much harder Daddy was on me.

Thinking back to the last two years of high school, the setting appears fairly comical. Our head coach was calm-mannered but incredibly wise when it came to the game. He communicated the most through hand motions, and when he talked, he cupped his hand on one side of his face as if telling a secret. I’m still unsure as to why he did this, whether it was simply habitual, or an attempt to project his voice.

Assistant Coach Daddy, on the other hand, was the exact opposite – verbal, loud, aggressive, and almost always too far out on the court. Of course, the source of his projections tended to be me.

“What are you doing?” he would say. “You’re running around like a chicken with your head cut off! Who was that ball supposed to go to? The people in the bleachers aren’t playing!”

And since I inherited some of him, I sometimes would respond maturely by yelling back.

“I didn’t mean to! You’re acting like I meant to do that on purpose!”

And he always responded in the same way, with a phrase, I’ll admit, sometimes slips out when I’m arguing with my husband.

The times I came off the court were the worst. I tried to sit at the opposite end of the bench from Daddy, and he either followed me or slung me down beside him with his words. Sometimes he met me before I even got off the court, pointing to something I should have done differently. Coach Shaw always attempted to be the calming, peacekeeping agent. Almost a head taller than my Dad, he wiggled his way in between us and tried to talk calmly, hand in place, reassuring me of the good things I did, and helping me focus on things to improve. I, on the other hand, strained around his agile figure to argue with Daddy, who simultaneously tried to prove his side of the argument. I don’t know how Coach Shaw put up with us both. 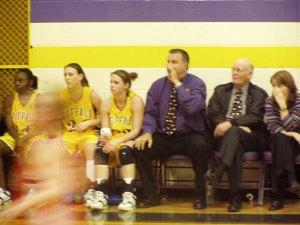 “Jami, I know you’re not perfect,” Daddy told me once. “But I expect you to be. I know that’s not fair, and I know you never will be. But I still expect it. I’m sorry if that’s not fair. But it’s how I feel. It just is.”

That might seem harsh, but oddly enough, I understood. And in the several years since that conversation, I have learned to appreciate and respect how he treated me. I’m not saying it was easy. It was hard, really hard. And I’m not saying it’s a perfect parenting model. But I never felt overwhelmed because I was not, am not, can never be perfect. Knowledge of that left me free to be pushed and stretched and challenged.

Although he held a more competitive spirit than any I’ve seen, although he sharpened skills  and talents – those weren’t the things he truly encouraged. His coaching, whether verbal screams that made me wish he’d leave the gym, or the (less common) silent, subtle nods and winks, spurred in me the desire and passion to work hard and be teachable. I hope I never lose the competitive drive I have… so far it’s remained a companion, whether playing a game of scrabble with my husband, attempting to understand my literary theory class in graduate school, or being determined to breastfeed a newborn baby as a first-time mother. But the competitive drive is not what gets me through those things. It’s the attitude of dirty fingernails, raw pen-mark indentions, late nights of coffee cups, and walking another step when I don’t have to…those are the things my Dad coached me in and those are the things I pray I never lose.

A few months after Daddy died, I wrote him a letter. After rambling on in my letter concerning random things, I wrote about my concerns with graduate school, whether to simply obtain a Master’s degree, or to go ahead and pursue a doctoral path. I admitted that since he once encouraged me to get my Ph.D., I felt obligated to do so, whether or not I believed it was for me. Although I guessed a conversation with my Dad would prove what I knew in my heart, that he supported me no matter what, I wrote that I wished selfishly to be able to discuss it with him.

That same evening, I sat, frustrated, trying to pay Nick’s student loans online, and unable to remember our username and password. I decided to search my inbox in hopes of finding a confirmation email from the first time I set up the account. After typing “loans” into my search box, three irrelevant emails appeared.

Hope your day is good.

I’ve been thinking about you a good deal since we talked on the phone yesterday.  Something that I want to express to you, so I’ll do it the only way that I know how…straight up front…

Whatever you choose to do, in college, in life, is up to you.  Not me or anyone else.  WE ARE FOR JAMI LEE.  I trust your judgment.  If you play basketball 1 year, 4 years, is up to you, not me.  I will support and follow you if you play, and I’ll support and follow you if you don’t play. If you go into mission work or marry a preacher and/or both or whatever else you may choose, I’ll support you.  Please do what you feel is right, both now, and all your life.

I’ve written this in the hope that you will know my heart and not ever do anything just because you think I want you to.

Soar high my precious one.

I played college basketball for two years, and my parents attended almost every game. I participated in overseas missions every summer since that email, each time supported financially and prayerfully by my parents. I indeed married a minister, and Daddy walked me down the aisle.

I’m thankful for the yelling, the scolding, the pushing. And perhaps none of that would mean anything without the winks, the silent nods, the sly grins. Daddy challenged me and coached me, and sometimes threatened to make me walk home from games. However flawed or imperfect his method of correction and motivation, his coaching continually exhorts me in a value I failed to understand the full implications of at that time. Keep on. Work hard. Be faithful. Finish. The completion of the game is what should motivate my playing of it.

I still hear him screaming at me from the sidelines, expecting me to be perfect, even though I’m not, and I hear him admitting that he’s not being fair. But in addition to and because of those things, I hear his final line of the email.

Soar high my precious one.